Let’s talk homemade buttermilk biscuits! If I have a food weakness I would have to say it is bread with meals. While I love most any soft bread, what I miss the most are my grandmother’s homemade biscuits. We always called my grandmother ‘Mema’… and everyone who ever knew her would attest that Mema made the best biscuits you would ever eat. In a matter of minutes, she would whip up a baking sheet full of fluffy biscuits with literally every meal.

Like most grandmothers, she never measured a single ingredient. She just knew exactly how much of each ingredient to add by sight and feel. Personally, I think it is years of biscuit-making experience and knowing what the dough feels like in your hands when it is perfectly correct and ready is what separates a good biscuit from a great biscuit. Mema’s biscuits were so good that the only job outside of the home that she ever had was making biscuits for a local restaurant called The Biscuit House.

Breakfast was the most amazing meal of the day at her house. Neese’s hot sausage, country ham, fried eggs, baked apples, and that full sheet pan of golden brown biscuits was to die for. For you folks reading this from the south, we always topped breakfast off with a Karo biscuit or two. If you happen to know what Karo syrup is, make these biscuits and then in a small saucer take a knife and slice a little butter and pour some Karo over the butter, and mix it up real good. Then take a hot biscuit and basically sop up the Karo from the saucer with it. It is actually delicious!

Making these homemade buttermilk biscuits was certainly her love language. And trust me, you would not eat just one, she would not let you. I think there were many times as a teenager I probably ate five or more myself at the breakfast table. All my neighborhood buddies would show up and she would see to it we got our fill.

One thing she did that I now find convenient is how she kept all of her dry ingredients in a large bowl covered by a piece of wood she used for many years as her floured work surface. She kept her self-rising flour in the large mixing bowl and after so many years of use, the board became the perfect floured surface for making her amazing biscuits. After each batch, the bowl, board, and her sifter would go right under the counter until the next meal. There never was a mess to clean up as I have after every time I make my biscuits.

I mix my dough in a plastic bowl and roll them out on my countertop. I have to flour my rolling pin each time and then I wash it and clean the countertop afterward so it never builds up that soft floured coating that Mema’s setup had. I regret not getting her bowl, board, and sifter after she passed away. As I have now got much better at making biscuits these items would have been a true keepsake to carrying on her biscuit-making tradition.

I always had an interest in carrying on her homemade buttermilk biscuits recipe tradition. Mema tried to teach me countless times how to make her biscuits. I watched as she only used flour, Crisco, and buttermilk. Those were the three simple ingredients. With her there looking over me as I would give it a try, the biscuits would always turn out good. However, once I started to try making them solo on my own I was never even close.

The main problem was she never measured anything and could not tell me how much flour, Crisco, and buttermilk she used. As I mentioned, it was all done by the feel and texture of the biscuit dough. After she passed away I made several attempts and well, you could say the first time and few attempts after they were basically hockey pucks. After those few failed attempts I had pretty much accepted the fact that I just was not able and the taste of her southern buttermilk biscuits was now a coveted memory.

Several months ago my luck in biscuit making changed. The desire to make homemade buttermilk biscuits struck me and while back at the grocery store I randomly picked up a bag of White Lily Flour. Now I honestly don’t know what brand of flour my grandmother used but I was quickly delighted when I saw the easy recipe for southern-style buttermilk biscuits.

To my surprise, the recipe called for the same basic ingredients that my grandmother used. The difference of course was I now had measurements for the flour, Crisco, and buttermilk with step-by-step instructions. At the end of the day, this was it! It is exactly the same way Mema made her delicious biscuits. I went straight home and gave this great recipe a try. Here is exactly what I did.

Cutting board or counter surface for rolling and cutting biscuit dough

Before getting started I go ahead and turn my oven on to bake at a temperature of 475 degrees so it can be preheating. After you make these biscuits a few times you will get quicker and not want to have to wait on your over to reach 475 degrees.

Using a measuring cup take your White Lily Flour and measure out 2 cups self-rising flour and pour in your large plastic bowl. While I have the Criso out I use a little and evenly grease up by sheet pan so it is ready for the biscuits. Add 1/4 cup of Crisco and either using your hands or two forks you want to mix the Crisco into the flour as evenly and consistently as you can. Basically, small bits of Crisco are evenly dispersed into the flour.

I then take a cheese grater and grate 2 tablespoons of cold butter into the flour bowl and mix it in. I venture out here and add a teaspoon of salt and sugar for taste. Next, measure 3/4 of a cup of buttermilk and pour it into your bowl. Using your hands, now pull the flour into the buttermilk until a soft dough forms. In my opinion, this is where the practice comes in. After making biscuits several times you will start to recognize the feeling of the flour properly mixed with the buttermilk.

At this point, I drop a bit of flour into my sift and then spread it out on the countertop or cutting board. Be sure to have a decent amount of flour on your hands and remove the dough from the plastic bowl and lay it on your floured surface. Work the dough a few times but don’t overwork it. If you want your biscuits to come out with flaky layers on the inside, then fold the dough over itself a few times. Again, don’t overwork the dough.

Using your floured rolling pin, spread and roll the dough to about a one-inch thickness. Flour your biscuit cutter and cut the dough and transfer biscuits to your sheet pan. After each cut, roll up excess dough and roll out to cut as many biscuits as you can using all of your dough. Once you fill your pan take some melted butter and brush onto the tops of the biscuits.

You are now ready to place biscuits into the preheated oven at 475 degrees. I let my biscuits bake for 8 minutes or until slightly golden brown on the top. I always set my timer for a bake time of 8 minutes just so I do not overcook them.

When that timer goes off you are ready to enjoy the best homemade buttermilk biscuits you will ever have right out of a hot oven. This simple recipe is truly the closest thing to my Mema’s biscuits that I have had. They truly do bring back some amazing memories of sitting around the breakfast table with my grandparents. I am grateful to have discovered this taste of home and hope you will enjoy it as well!

Let’s make homemade buttermilk biscuits. This easy biscuit recipe uses White Lily flour and the option for only 2 other ingredients. Just like Mema used to make.

Preheat the oven to 475 degrees

Add 1/4 cup of Crisco and using your hands or two forks you want to mix the Crisco into the flour as evenly and consistently as you can.

Take a cheese grater and grate 2 tablespoons of cold butter into the flour bowl and mix it in.

Add a teaspoon of salt

Add a teaspoon of sugar

Add 3/4 of a cup of buttermilk into your bowl

Using your hands, now pull the flour into the buttermilk until a soft dough forms.

Remove the dough from the plastic bowl and lay it on your floured surface.

Work the dough a few times but don’t overwork it.

For flaky layers on the inside, then fold the dough over itself a few times

Using the rolling pin, roll the dough out to about a 1-inch thickness

Cut biscuits and place onto the sheet pan

Once all the dough is cut into biscuits, place full sheet pan in the oven and bake at 475 for 8 minutes 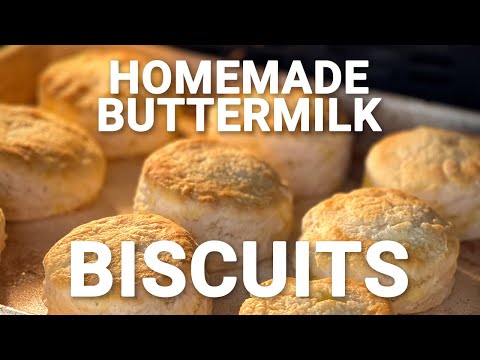 Stay Connected with us

Welcome to the Crafted Cook! We are new and just getting started sharing our favorite grilling recipes.

Please be sure to sign up for our newsletter while you are here and we’ll be sending fresh recipes just in time to light your grill for the summer.